Erected as a short-term measure in the wake of a troubling series of student suicides, the fences on several bridges on and around the Cornell campus drew concern and conflict among area residents and Cornell students and alumni. Today, after just over three years, the University has begun to take down the fences. 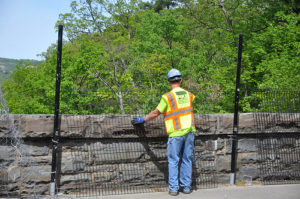 When they were erected in March of 2010, the fences across the gorges were “a barrier that bought people time and drove them away from attempting that means of suicide, one of the deadliest,” says Svante Myrick, now Ithaca’s mayor and then the Common Council alderperson representing the City of Ithaca’s fourth ward.

“It gives them a moment to stop and think,” agrees Lee-Ellen Marvin, executive director of the Suicide Prevention and Crisis Service of Tompkins County. Marvin says the steel mesh netting that’s now in place under seven bridges bordering the Cornell campus will have the same deterrent effect.

Marvin and her staff were involved in discussions with Cornell University and the City of Ithaca helping to design signage near the bridges that offer hope and resources to turn to for those contemplating suicide. “One of the challenges we meet is that students are coming to the area with cell phones from all over. Should we put the local number or a national toll-free number on the sign? If a student with a cell phone they brought from Austin, Texas calls the national hotline, they’ll be routed to a crisis center in Texas. But they will have the right resources, and can point them to services here. We would do the same.” 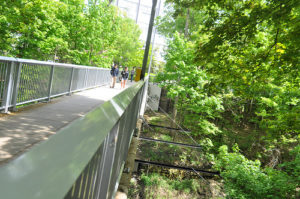 Mayor Myrick says he’s “ecstatic” to see the fences coming down, and the views from the area’s bridges restored. “The views of the gorges was what sold me on Ithaca as a 17-year-old prospective student,” he says. “I’ve been in love ever since.”

“This low-visibility steel mesh, hung below the bridge decks, fulfills a promise to the Cornell and Ithaca communities that permanent public safety systems would not obstruct views of the gorges,” the University said in a prepared statement.

The tensile steel mesh netting, coated to last twenty-five years, was designed in Switzerland, manufactured in Vietnam, and coated in Germany before being shipped to Ithaca. “Once they come in, Pike [Construction] has done an exceptional job of getting everything installed,” says John Keefe, the project director at Cornell University who supervised installation.

Keefe says that even if the presence of the netting doesn’t successfully deter a troubled person from jumping, they will likely be caught in the mesh. Infrared and video equipment will help alert the Cornell University Police Department in the event a person jumps, or something is thrown, into the netting.

In the event of an alarm, “Cornell Police will send a patrol car and Environmental Health & Safety, and if a person is in the net, they will dispatch Ithaca Fire Department for a rescue.” Cornell worked with IFD to provide training to area firefighters both in the gorges and on netting that has been set up at the local fire training facility.

“Cornell and the City will not take lightly” any vandalism or objects being thrown into the netting, Keefe says. Pike Construction is on call 24/7 to inspect the nets after a person or object falls in, and can apply a temporary sheet until repairs can be made.

Anyone jumping into the netting will probably be hurt, especially if they hit the steel struts, Keefe says. “The three-millimeter steel mesh is like a cheese grater,” he adds. Even if they’re unhurt, it will be difficult for people to climb out on their own. 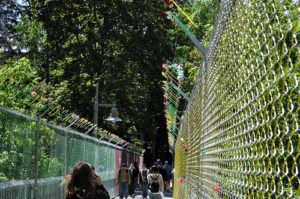 Pinwheels on the bridge fences near Collegetown in the spring of 2010.

When the fences were first put up, Cornell students took it upon themselves to brighten them with colorful paint, ribbons, and pinwheels.

The National Suicide Prevention Lifeline is a free, 24/7 service that can provide individuals considering suicide, or those around them, with support, information, and local resources. The toll-free number is 800-273-TALK (8255). The Suicide Prevention and Crisis Service of Tompkins County crisisline is available 24/7 at 607-272-1616. 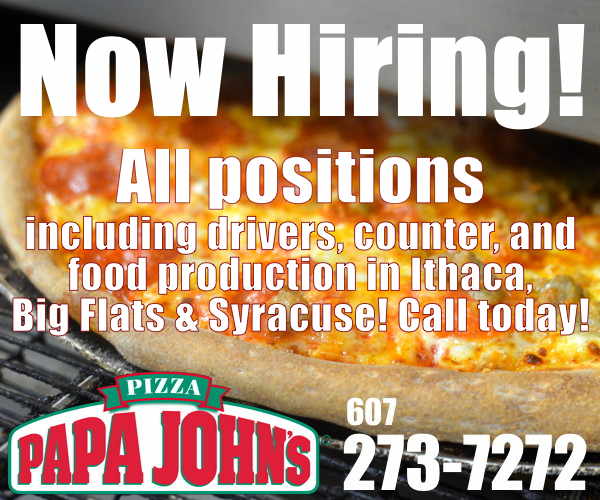